When a friend who works alongside some of the best Astrophysicists in the world told us that we could take photographs of the night sky with any ‘pretty standard’ digital camera, we thought there must be a catch. We had seen her cameras attached to telescope lenses and knew that this involved “serious business” (and serious money).

Thankfully, we ignored our inner cynics and decided to give this a go and we’re pleased to report she wasn’t wrong. The following tutorial explains how to create stunning images of the stars above using only Photoshop and a digital SLR. We know RB is home to some seriously talented Astrophotography buffs, so we’ll stress that this is a first attempt. If you have done this before, please share your images, tips and experiences in the comments! 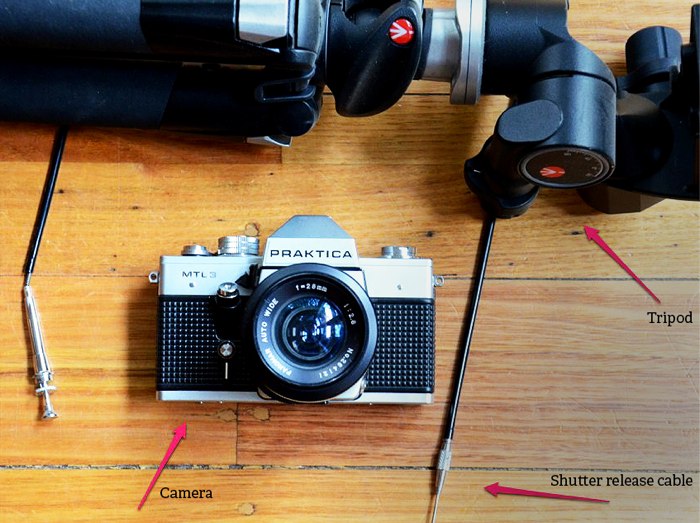 The 600 rule is a calculation to tell you how long you can expose for before you’ll see star trails. With your tripod and camera set up in a dark place away from light pollution, play the 600 rule, which you can use to prevent the stars from moving too much due to the earth’s rotation during a long exposure. If you don’t use the 600 rule, stars can be seen moving with an exposure of just a fraction of a second, alas, you may get star trails. Some people use the number 500 instead of 600, but this may be a matter of taste and equipment. To make life easier, this 600 rule chart is a great calculator.

Once you’ve determined your exposure time, set your camera to bulb setting, set your ISO as high as possible without creating noise (we set it at 500), set your aperture to it’s widest setting and if your camera allows it, set the lens focus to ‘infinity’.

Shoot multiple photographs of the same area of sky. Shoot ‘sets’ of a minimum of 5 images, around 15-30 is good for a first go. Save yourself some serious frustration in the dark – if your camera has a setting to fire off shots every 2, 5, or 10+ seconds, put it on now. Sit back. Gaze upwards.

TIP: Once you’re done with a set and want to shoot another part of the sky, shine a flashlight infront of the camera to mark the end of the set. When you look at the images in your photo editing software you’ll be able to easily tell when a set begins and ends.

Get off the roof carefully, avoiding a compound fracture, and pop your photos into Photoshop or your editing software of choice. Do not be alarmed by what you see (or don’t see). It will look black, disappointing and possibly quite boring. There are many more stars ‘beneath’ or ‘behind’ the blackness you see at first. But this is just the beginning: 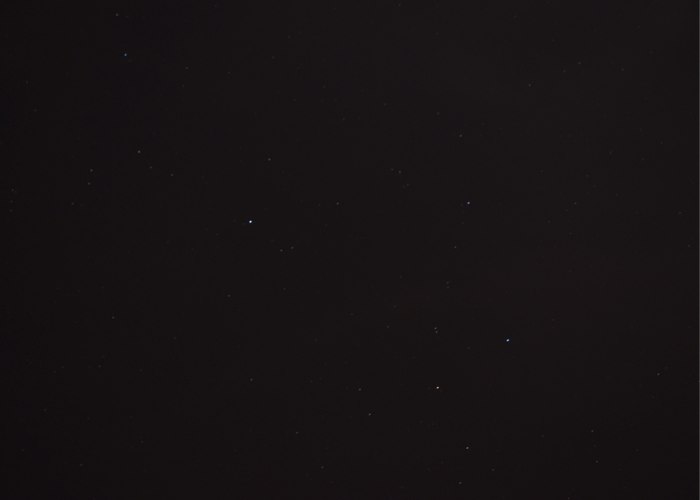 Image stacking is crucial to gather all the stars and astronomical features you’ve collected into one image. Superimpose all your images from a single set on top of each other. Image stacking reduces noise and compresses between 15-30 images into a single TIFF. We are going to do this in Photoshop, but popular Astrophotography software choices are Deep Sky Stacker or Nebulosity 3.

Create a stack by using a Script: (File > Scripts > Load Files into Stack). 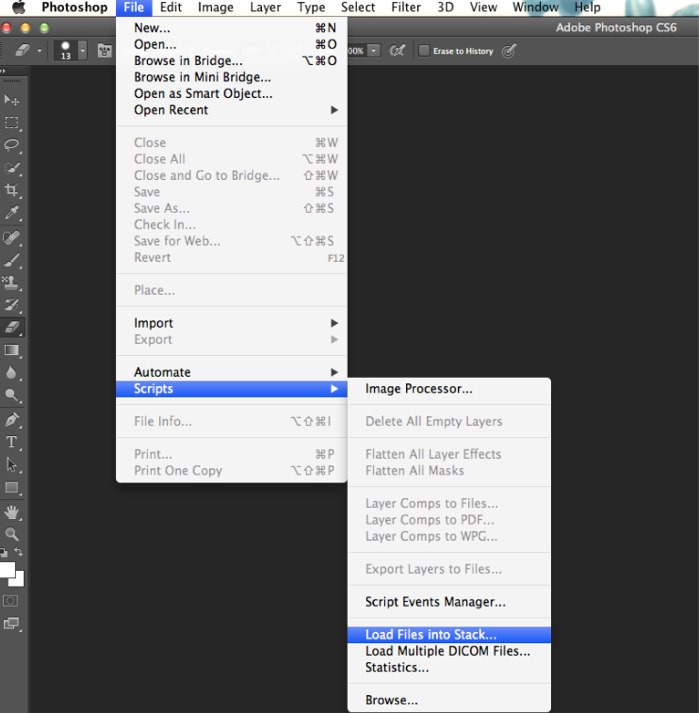 Your stacked image will probably be created as an 8 Bit Channel image – change the image now to 16 Bit by selecting: Image>Mode>16 Bit. 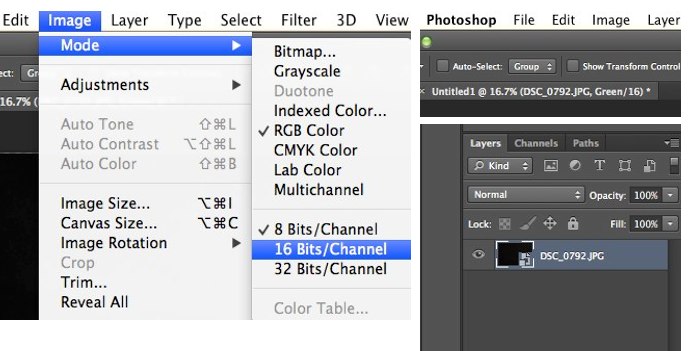 Before we begin tinkering we’ve duplicated our layer (Layer>Duplicate Layer) in case we make any mistakes and need to backtrack. Adjust curves (Ctrl M) by pulling the diagonal line from the bottom left hand corner up into a large sweeping curve, which will drastically ‘open up’ the information in your image. Watch as stars appear out of the darkness (as well as clouds and other surprises). The first curve can be quite drastic, bringing the line straight up before curving over to the right at the top. 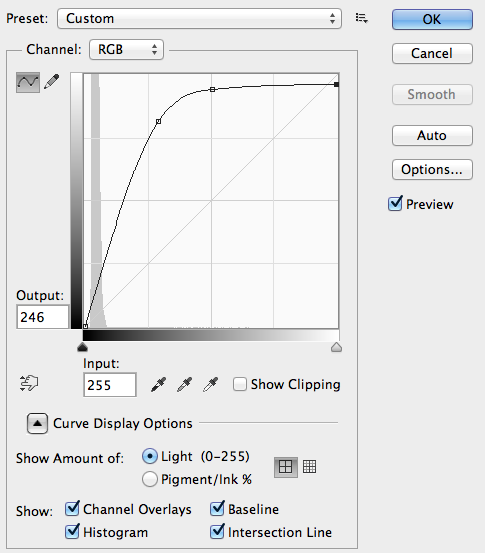 TIP: To get a subtle yet effective contrast boost, open the Curves box and click a single graph square on each grid crossing, starting from the bottom left black corner to the top right white corner.

Information will start to appear in your image:

Drag the horizontal levels slider (Ctrl L) halfway between the edge of the box and the black data band. You’ll notice the black data, or information band in the box is very narrow.

9. Repeat steps 7 and 8 until the image starts to break down

Once you’ve adjusted the layers, it’s important to ‘push’ the image as much as you can – by repeating the moves we did on the curves and layers. Repeat this step until you’re happy with the exposure, depth and contrast of images. It helps to put the image in black & white mode for this editing process, giving you the best chance of making the whites (stars, clouds and nebulas if you’re lucky) really stand out and the blacks deepen.

10. Creating color in your image

The following steps allow for the most imagination and creativity. Setting the Brush tool to an opacity around 1-3%, you can paint the pixels of your wonderous image to your satisfaction. We’ve chosen colors that appeared naturally in the night sky as we saw them, particularly the deep blues and purples that stood out. There are literally hundreds of different ways you could apply color to your image, but the easiest way is with a brush tool at a low opacity. You can choose colors from the RGB sliding pallete in the upper right-hand corner. Alternatively, bring the color back into your image and let the natural colors speak for themselves. Don’t forget the Hue Saturation (Ctrl U), Color Balance (Ctrl B) or Channel Mixer (Image>Adjustments>Channel Mixer) settings for tinting and many other color options. 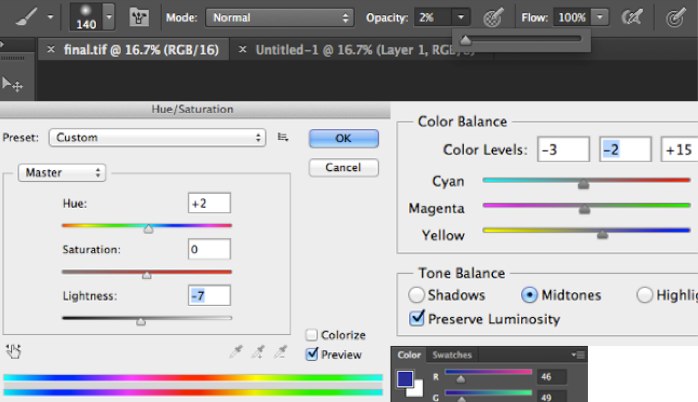 You can put the finishing touches on your image using a number of methods; play with the Vibrance (Image>Adjustments>Vibrance) or visit the Brightness & Contrast (Image>Adjustments>Brightness and Contrast). Be careful not to go overboard on the brightness as it will break the image down. If you’d like to make your image more vibrant, try adjusting the Shadows & Highlights as well as dodging in some of your lighter star clusters. Don’t forget to flatten your image (Layer>Flatten Image) to bring the size right down.

Once you’ve finished, please share your amazing creations in the comments below! 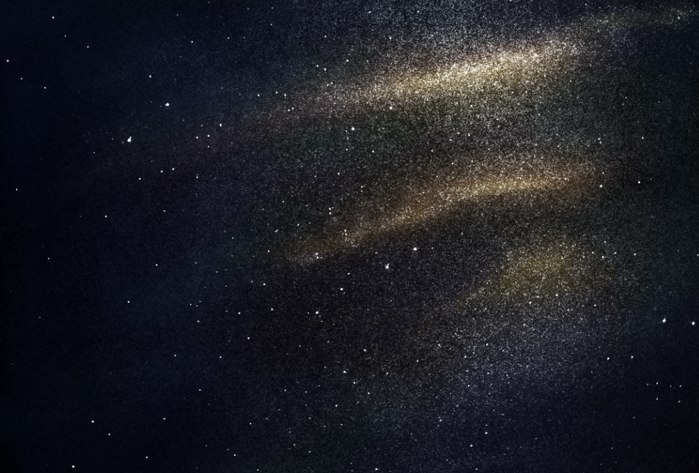 This tutorial is just an introduction to the wonderful world of Astrophotography. If you’ve experimented with this technique, we invite you to post your favorite Astrophotography shots and experiences in the comments below. Need help? See our handy guide on posting images and links. And you’ll also find more inspiration, guidance and tips in the Astrophotography group.

Some inspiring examples of Astrophotography from talented RB artists:

The Milky Way by Greg Clifford