“I am no artist. I am an artwork. When I die my skin will be removed, framed and given to the owner at that time.”

“I sat on a box in Tasmania, motionless for 500 hours. But it is not performance art because I am no artist. I am an artwork. When I die my skin will be removed, framed and given to the owner at that time.”

The practice of tattooing is more 5000 years old. Google tells us this. Whilst the idea has stayed the same, the motivations of the practice are more varied now than ever. Some willing subscribers will canvas themselves for no other reason than a drunken desire. Others will get inked out of love, fashion or to announce their rebellion – but there are other reasons.

Throughout the 1990s, Belgian neo-conceptual artist Wim Delvoye began a new body of work based around the idea of tattooing pigs and went about setting up a live art farm in Beijing. Part of the point was to watch the pigs literally grow in value. It was a piece that was only exaggerated by a subject’s eventual death. The inevitable conclusion of such an exploration took place in 2006 when 35 year old Swiss-born Londoner Tim Steiner volunteered to be marked and included in Wim’s touring exhibition, offering his back as a canvas for Wim. For a reported $205,000 the work itself, the literal skin on Tim’s back, was sold to a German collector. Recently I had the pleasure of speaking with Tim about art, death and the most aberrant contract you’ll ever encounter. 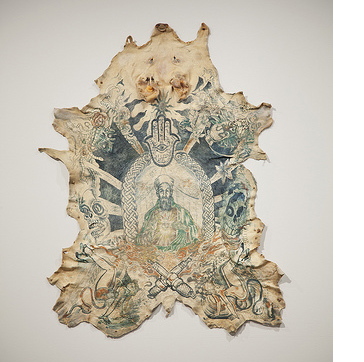 How did you come to meet and be involved with Wim? Were you familiar with his work?

In 2006 Wim was part of a group show in the Zurich gallery, de Pury & Luxembourg. My girlfriend was working there and he approached her, saying that he was looking for a human being that he could do the same thing with as with his pigs. He wondered if she knew anyone and because I had a few tattoos she called me and told me one of her artists was looking for a person to tattoo and sell.

At the time I didn’t even know that she was speaking of Wim (whose work I loved for years), but I agreed immediately. It sounded wild, different and in today’s art world it was about time that a person was turned into a commodity.

Did you have to think about it for long before agreeing? What were some of the considerations you were wrestling with? What was it that made you say yes?

I agreed immediately. Didn’t think too much at all. Sounded like an extraordinary experience. Once in a lifetime type thing. No thoughts, just did it. I think sometimes life throws stuff at you and you just have to go with it.

Part of your contract requires you to exhibit the work three times a year, in public and private shows, in different corners of the world. That means travelling to the other side of the world to sit facing the corner with your shirt off all day. How does it feel to be on display like this? At the time are you conscious of the fact that you’re being viewed as a piece of art?

It all depends on where I’m on show. At times I’ve felt extremely vulnerable and naked. At MONA I felt amazing. They all took such good care of me that I never worried. At the beginning of every show I’m very nervous, but with time I just disappear in my head. The music I listen to really helps because the world around me disappears and I have no clue what’s going on. I love doing it / I hate doing it. It’s everything at once. 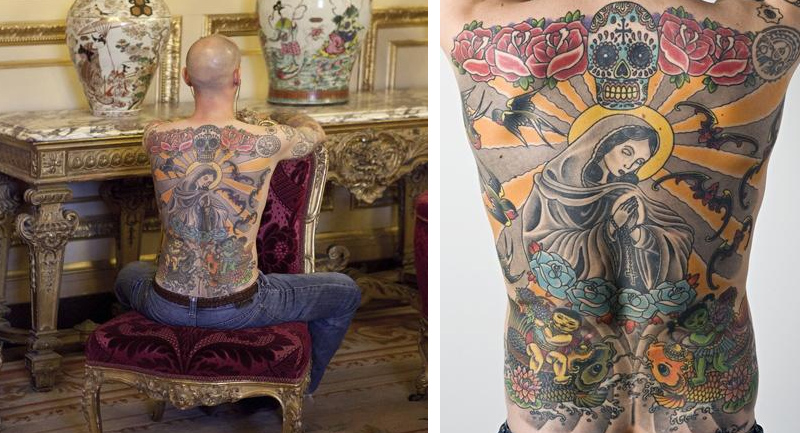 It’s been a couple of years since the initial sale. Has your perspective or philosophy behind the work and your choice to be involved in it changed from when you first agreed to being tattooed?

Yes. The project and I have both grown. At the start I felt like a clown at times, but now there seems to be a certain amount of acceptance from the art-scene for what we’ve done. Makes it easier. MONA and the Louvre were extremely important for me. I always felt that this thing was ‘big’, but it feels good to get recognition from the professionals.

Do you find yourself reflecting on the fact that you’ve ultimately been bought as a piece of art? Does it change how you see yourself or what ’art’ is?

I see no difference between what I do and anyone who has a contract for the job they do. Art is an idea. Everything is an idea, a concept, a limited understanding. I’ve learned that I, and basically everyone and everything else, am looking for answers to questions we don’t really understand yet. My spectrum has broadened. I have experienced amazing things because of this project. I’ve seen myself from new angles and am simply enjoying the bizarre intensity of it all.

Have you ever regretted your involvement?

No. I’ve had pretty desperate moments, but never regretted it.

Perhaps one of the most interesting things about the sale of the work is what happens after death. Can you talk me through what happens and how you’ve reflected upon this?

When I die my skin will be removed, framed and given to the owner at that time. Of all the things that have to do with this piece, that aspect interests me the least. I’m dead. No longer here. Who cares. I’m an organ donor and my back is just skin. I used to find it cool that I’ll be remembered, but Wim will be remembered, not me. It’s a Wim Delvoye work, not a Tim Steiner. And that’s just fine. 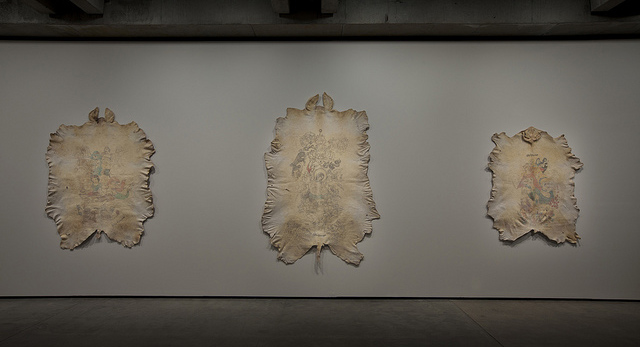 I’m interested to know more about the person that purchased the work. Was it important to you who it was that was ‘buying you’? Did you meet them before or have you since? What did you talk about?

When the project started there was a German art collector from Hamburg called Rik Reinking who worked on different exhibitions at de Pury & Luxembourg gallery in Zurich. We met and got along splendidly. Once the piece was completed and for sale I contacted him and offered it to him. The idea took some getting used to for Rik, but eventually he agreed and the piece was sold to him. It was after a conversation he had with another collector who told him ‘this piece carries the signature of the devil’ that he knew he had to have it. We have become very good friends over the years and it’s been a great pleasure to do this together. We’re also the same age which helps. 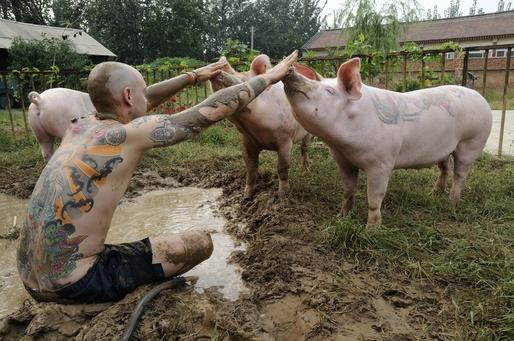 That highlights another interesting point. If Rik is the same age as you, doesn’t that essentially mean it’s likely he’ll die before he gets a chance to see ‘the finished work’? What happens then?

It’s unlikely that Rik will still own the piece then. Wim would like a resale at some point. Secondary market with auction and profit. The whole shebang. Really take the concept to the extreme. Wim wants me to be a ‘Lot’ and have people in suits bidding on my living skin. Rik knows this. I would also like to know how it is with various owners. Wim calls it a commodity. Rik owns it now, the value rises, he sells, on and on until I die. No different from any other piece on the market.

I vaguely remember a quote from a long forgotten film about everyone knowing their death was coming and secretly believing they could somehow avoid it. Do you find that this permanent mark on your back makes your death all the more real or immediate? Has this changed the way you see art or the way you see life?

I fully agree with the quote from the movie. I also find myself strangely confronted with death because of this project. There’s an actual focus on me dying. Until then, there’s a story. My story. Which is the story of the piece, but it isn’t. Because the piece and I are separate, but we’re not. For me the tattoo is always there and doesn’t exist. It makes me more alive, but with a huge dose of my own death around the corner. It all makes complete and no sense to me. I’m doing this very public thing which essentially has nothing to do with me. It’s Wim. How much of it is Tim? I don’t know. I try to share with people why I do this. The majority don’t understand, or don’t care. I sat on a box in Tasmania, motionless for 500 hours. But it is not performance art because I am no artist. I am an artwork. By someone else. The death thing doesn’t bother me too much. It’s my dependence on others that sometimes worries me. There’s a lot of parties that I’m dancing on and I have to keep all the hosts happy. If they disappear, I disappear. But the only one actually doing/living this is me.

What I have experienced because of this project over the last six years has been a blessing and a curse. I sold myself. From now until the end. That trips me out at times. But I want to pull this off. I think it’s very real and for me it’s become very important. I have become something that I have no control over. I just have to go with it. Art imitating life. Life imitating art. Same difference.