There is no future. We have evicted ourselves from our own cities, rendered our agriculture poisonous, criminalized the poor, aggrandised the rich, honored the stupid and ridiculed the intelligent. I have no solutions, no wisdom to offer. Whilst Rome burns, I take up my little chisel and I carve a panoramic apocalypse of my own. And if you want to see it, you're more than welcome.

Stanley Donwood gained recognition in 1994 when he began designing album art for the Grammy award winning rock band, Radiohead. His work has since been used for 15 singles, 9 EPs and various studio albums including The Bends, Kid A, OK Computer, and Hail to the Thief. In addition to his work with Radiohead, Donwood has successfully exhibited paintings, etchings, lino prints and screen prints across Europe, Asia and the US. He has published 5 of his own monographs, created a record label (Six Inch Records) and designed all official artwork for the Glastonbury Festival since 2002. Donwood currently lives and works in Essex, England. Thomas Hyland caught up with Stanley Donwood ahead of his exhibition at Subliminal Projects in LA, this month.

Firstly, why Los Angeles or why America for that matter? Have you a personal connection with these places and how they affect you?

I’ve chosen the USA, and Los Angeles in particular because it, to me, epitomises a terribly sad truth at the heart of our civilisation; that we are fundamentally lazy and short-sighted. This isn’t a criticism, as it applies to all living creatures. We all like to expend as little effort as possible and have very little regard for the future. Los Angeles is a city founded on the availability of cheap and easily obtainable oil. It is, in many ways, the archetypal city of the private motor car, of freeways, parking lots and suburbia. Essentially, as has been pointed out by no less than Gertrude Stein; “there’s no there there”. The thing that worries me is, what happens when we run out of oil? When we reach ‘peak oil’? When we find out how terribly fragile our civilisation is? Disaster is very close. Very close indeed.

It seems that so much of your work is ephemerally linked or in opposition to the effect of commercialisation and technology on people or society. Do you think these influences are also changing the way new artists develop their art?

I think that when I was younger I was opposed viscerally to what I viewed as ‘commercialisation’ and I tried to live in a resolutely non-commercial manner. As time passed however my life altered and eventually I earned some money and bought a house and had central heating installed and flew in aeroplanes, owned credit cards and even ‘went shopping’. This probably had a lot to do with having children and realising I shouldn’t foist my views on them. It’s more than possible that my work has become fossilised in some way, encased in a sediment that no longer applies to my actual life as I live it in the present. As for new artists, I don’t really know many artists and those I do know are dirt poor. I could pass judgement on artists who I don’t know but I prefer not to.

Tell us about how you started out as a artist. Did you begin by discovering an interest for art (of any/all forms) and then hone this through an art school?

I did art at school then at college then at university because it was the easiest subject and the idea of having to get a fucking job was anathema to me. As I said earlier, like everyone I am lazy and short-sighted. I detested the idea of working, so I did everything I could to avoid it. I went to art school because I liked the look of several girls who went there. However, my ambitions in that direction came to naught. I ‘became an artist’ by accident.

How beneficial did you find art school to your development as an artist and to your career?

Hmm… I must have learned something. I learned how to print, but after college I was so poor for so long that when I eventually started printing again I had to re-learn it. I learned how to be very, very self-critical. That’s probably the most valuable thing. I met lots of fun people too, and there were some very beautiful hills to walk. And I learned how to exist with very little money, another invaluable lesson. 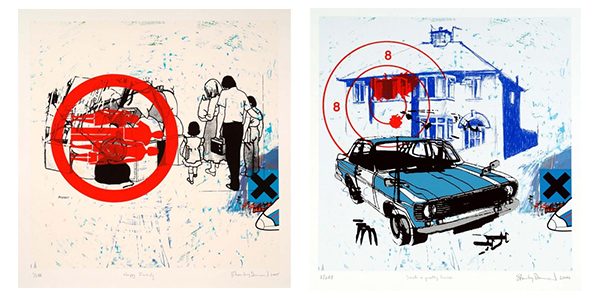 Did anyone, or any moment, ever discourage you from linking your ability to pay the rent with your artistic interests?

No, no-one, not even my girlfriend when we had one little child and another ‘on the way’. I think perhaps my mum may have worried on my behalf. But she never actually suggested that I should get a job. Just as well, really. It would only have led to a disagreement.

Before Radiohead, what were you doing for work? Did you have to supplement your income with a job you didn’t care about?

Well, in England at that time we still had the remnants of a very good Social Security system. It was frugal, but you could live quite well on it if you were careful. You still can, I’m told, but it’s got much much harder in the last fifteen years or so. Fortunately I lived in a very economically depressed area and all of my friends were in the same boat, if you’ll pardon the cliché. I have had many casual jobs and all of them were horrible in one way or another. Working at the Post Office was okay. I did consider becoming a postman. And I nearly became a tree surgeon as well. I liked tree surgery best. I liked the smell of sap and bark.

Were you ever worried that attaching yourself so closely to Radiohead would alter your position as an artist, or how your art is viewed, in a way less desired? That it may become part of a brand rather than art in its own right? Or that interest in your art the would be linked with the prominence or relevance or Radiohead?

No, not at all. I really like them all, and I really like what they do. It’s like being in a gang. I’m not at all bothered about ‘how’ my art is viewed, just that it is viewed. When I started working with them I was excited to be able to put my work out into record shops, which in those days I thought were way cooler than art galleries.

Getting back to your exhibition, the press release opens with “There is no future.” – do you believe this, or are you saying that the only future an acceptance of this idea?

There is no future, there is only the present. No-one seems to care much about the present.

Stanley Donwood’s solo exhibition is running until the 26th of May at Subliminal Projects – Shepard Fairey’s gallery space on Sunset Boulevard, Los Angeles. To find out more, visit his website: www.slowlydownward.com.