Each year at South by Southwest, the Flatstock poster expo showcases work from some of the best music poster artists the world has to offer. Flatstock veteran, Rob Jones has produced posters for bands including The White Stripes, The Black Keys, Band of Horses, Flight of the Conchords, The Raconteurs and The Kills. We tracked Rob down ahead of this year’s Flatstock, to quiz him on the methods behind his own brand of design madness.

If you’re interested in the symbolism in the Raconteurs posters, how Rob ended up with co-writing credits on Jack White’s latest single and his tips for excellent poster design, all is revealed in the following paragraphs.

Image credit: SXSW Flatstock – Photo courtesy of Merrick Ales
In your biography on Animal Rummy you seem to have lead an interesting life. Can you tell us the real story about how you got into illustration and design?

I took Lenny Bruce’s biography and changed the names to my own. My own life has really been quite a bore. I drew at an early age, I really liked artwork, my parents were adamant that I not pursue that – so I spent a lot of time not pursuing it. When I was in Austin I got lucky and made friends with a guy called Dirty Steve Sanchez of the Pink Swords. He wanted me to do all the fucking posters and I just thought, ‘awesome, sign me up’. I had the stupid thought that I could make a living at it. About two years later I managed to start making a living out of it. Not so much from talent though! I kind of lucked out. One of the bands that happened to like me were The White Stripes. Without them I probably would be trying to be a veterinarian right now. 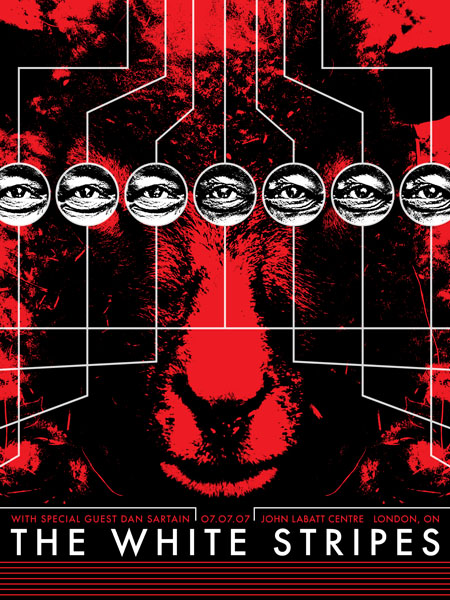 Image credit: The White Stripes: London ON by Rob Jones

How did it feel winning a Grammy for the packaging on Under Great White Northern Lights?

I really didn’t think I was going to win. I honestly didn’t prepare a speech at all. I was up against freaking Klaus Voorman who won every time he’s ever been nominated. Two of the guys I was up against designed the t-shirts I wore in high school – Vaughan Oliver for the Pixies and Klaus for the Beatles thing he did. 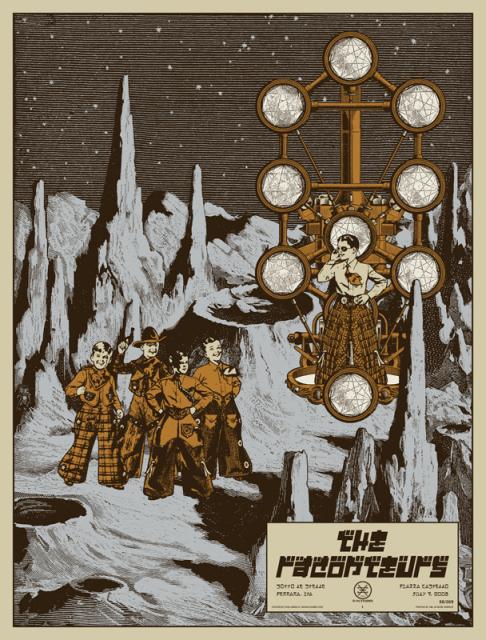 Apparently you’re credited as a co-writer on Jack White’s new solo track, Machine Gun Silhouette. Can you tell us about the email exchange that the lyrics are based on?

Yeah that was weirder than the fucking Grammy man, Jesus! I got the email from Jack saying, ‘by the way I’m putting you as a co-writer’, and I was just like, ‘okay’. A long time ago I wanted to get a thank you gift for Jack and I saw there was this taxidermy auction. I went there and stuff was going cheap. I got one of my goat heads for forty bucks! I thought this was the greatest thing ever. Most of the stuff I was attracted to, the shit kickers at the auction didn’t care for it – stuff that was too exotic, too weird or nobody liked. I went through the catalogue and saw there was an albino peacock and I knew this was something that Jack was after. I wrote back with some thoughts that the auction was on the up and up and I wrote enough goofy stuff, and he was bored enough, that he wrote a song. The weird thing was I asked him a question in the email and he didn’t write back, he just sent a song snippet, geez. Then months later I got the news that it was going to be a B-side. I can’t believe he wanted to split it. 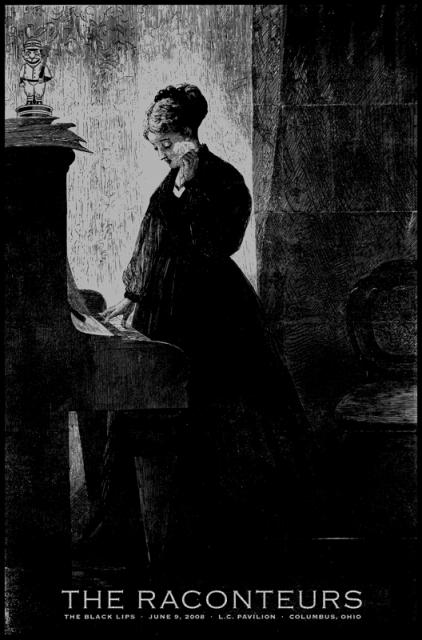 What has your relationship with Jack been like over the years?

The influence from Jack is unspoken. I know what the Stripes’ likes and dislikes are, and working with Jack over years I know what he’s into. It’s like they are guiding my artwork before they say a word.

There’s lots of speculation online about hidden codes and symbolism in the Raconteurs posters. Can you share any secrets? Was there a master plan before you started?

The ones with the little kids? I did a poster that was a fake country and western clothing store ad. I read somewhere that someone was wondering which of the kids was the Raconteurs themselves. It hadn’t crossed my mind until then, but after that I did two posters, then when the next album came out I thought I’d do a sequel and take scenes from this horrible Japanese movie.

If you ever look at how other people look at your own country, like how people think Australia is like guys wearing hats with corks hanging off them – that image is this weird hyper reality. I wrote out the plot of the movie and wanted water symbols attached to the Raconteurs kids. Their boss was this little David Bowie kid living on the moon. I worked it out so I could hide things in the posters. What sucks is that I’m five or six posters out from finishing it.

Are there any other poster illustrators or designers whose work you admire?

The people who got me into making posters were like Frank Kozik. Maybe because I didn’t like hippies, the first time I saw one in person was like night and day – seeing those colours jump off the paper.
If you ever see my early, early work you can see I was desperately trying to be Kozik, but awfully. I think that happens to anybody when you go into a field. You try and be like your heroes. Like Buck Owens sounding exactly like George Jones when he first starting singing. Until George Jones took him by the collar and said, ‘quit fucking singing like me seriously’. Buck developed his own voice. 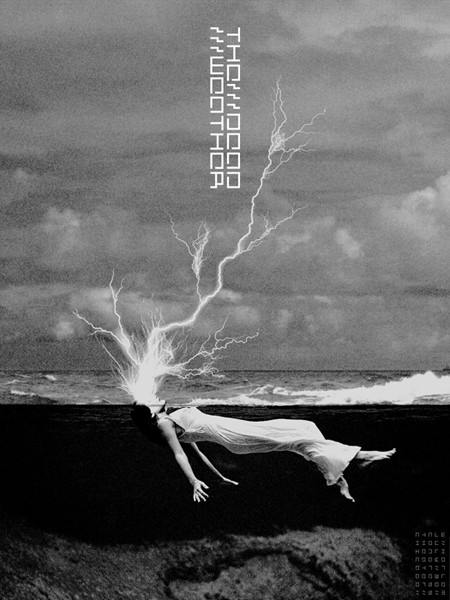 How do you select images to work with? Say in The Dead Weather’s Chicago poster for example?

The woman in the water? That’s a famous photo but I added the top of the water, the sky and the lighting. Actually my uncle had just died. I got really drunk at the funeral – like afterwards, not at it. I didn’t vomit into his coffin or anything. I got really drunk and it was the next poster I had to do. I was completely smashed and I was like, ‘I completely get why people are drunks, I don’t give a shit’.

So when my uncle died I just wanted to submerge myself. I wanted to get underwater. I wanted to get out all the crap going through my head. And you use drugs or alcohol to quiet down all the electrical activity in your brain and I used Joan Crawford’s face. But you can’t tell so her kids don’t sue me. 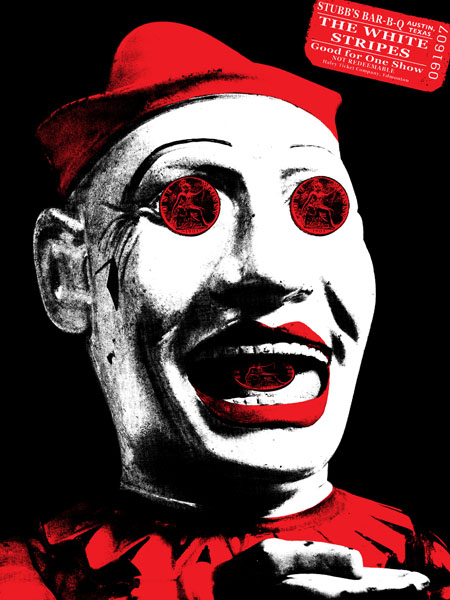 What advice would you give to emerging illustrators and designers? What do you wish someone had told you when you were starting?

My basic three rules if you want to get a design job are:
1. Be quick. Work fast.
2. Be very courteous. Always be easy to work with.
3. Be very, very good.

And I’m not kidding about being polite. I know some genius fools out there that I’d never even hire because their reputation is for being a jackass. If you’re fast and polite you’ll get a lot more work. So speed up would be my word of advice.

A huge thanks to Rob for taking time out to talk to us about his posters, Taxidermy and er, unique career advice. If you’d like your very own Rob Jones masterpiece, we’ve got an original Kills poster to give away. To be in the running, simply share this interview on twitter (and don’t forget to tweet @redbubble). 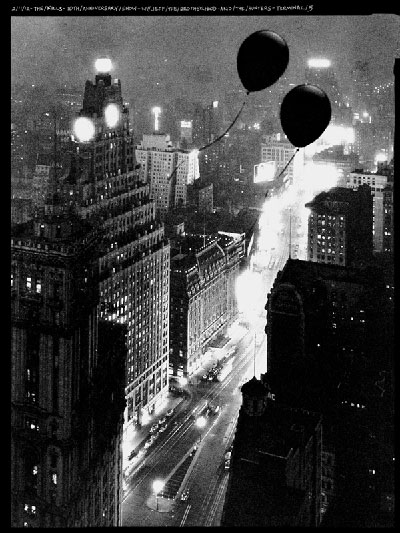