To mark the launch of series five of Mad Men this Sunday, we caught up with Mark Gardner, designer of the show's iconic title sequence, to chat about the creation of the titles, the relationship between art and advertising, and his love of photography.

We’re interested in hearing about how you take a creative concept through to a finished work. For the Mad Men title sequence, what kind of brief was supplied to you at the very beginning, what were your initial reactions and how did they differ from the finished product?

The first thing to state is the wide variety of different work that I do. I work on almost anything from re-branding companies/networks to creating content for movies/shows as well interactive work. Therefore the briefs vary hugely from project to project. Sometimes the brief is a 20 page document prepared by a marketing department or even 3rd party consultant, or it could literally be simply the pilot for a show and nothing else. I’m guessing you are more interested in Mad Men and title sequences like that, so we’ll stick with those as an example.

For a new show, we will usually be sent the pilot and then we’ll have a call with the creator or his/her team to get a deeper sense of the themes/tone/characters/goals of the show. Usually the network are involved to some level at this stage but really we want to hear from the person whose vision we are going to be supporting. Sometimes the creator/network has this all figured out (meaning they have a good understanding of what title sequences can or should do) other times they don’t know and will literally just give us the details/plots/trajectory of the show and leave it entirely to us. 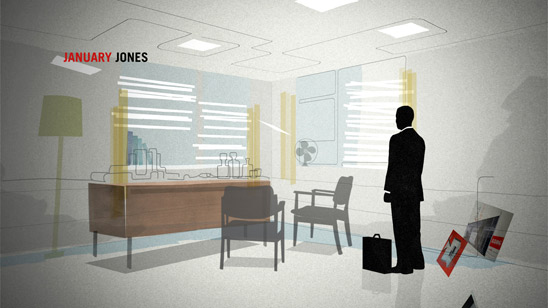 What I’m always trying to do is simplify the ideas down, distilling them into something that is powerful, and hopefully deep enough to engage the viewer, set up what is to follow, and maybe become clearer as the season progresses – so maybe how you see the sequence on the first showing will change as you re-interpret it over repeat viewings.

It was clear that the creator, Matt Weiner, didn’t want a retro pastiche. He wanted the show to feel relevant even if it had a period setting. He also wanted to set up the main character as an ambiguous figure, neither good nor bad, someone you could never really know. I felt there were some very powerful ideas going on here, and this concept of trying to communicate someone simultaneously both in control and lost began to develop. That’s where the idea of ‘the fall’ came in. It’s a sensation we all recognize, and it is a very simple thing to achieve visually. That was important as the budget for these kinds of sequences is never very high. Creating the end image took time, trying to imbue it with ambiguity and power to contrast with what precedes it, but once we had that we had the sequence. 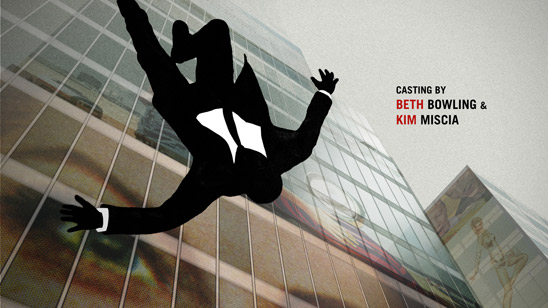 The main thing that changed during the production was the beginning of the sequence. At the storyboard stage (when we presented more than one direction) we begin with the figure falling away from camera. I wanted to make it feel like we were entering into the middle of some one’s dream. However Matt Weiner liked the idea of the fall being triggered somehow. So that’s where the office falling apart came from. That was by far the hardest thing to achieve from an animation standpoint. To create a very gestural/abstract scene and have it really feel like it falls apart was a real challenge.

Another thing is that the sequence started life with a very different soundtrack, and the RJD2 track was given to us about midway through the project. Ultimately it was using this very contemporary music that gives the sequence its modern day feel.

Was there ever a point where you wanted to take this somewhere, for artistic reasons, that you couldn’t due to the needs of the network or other parties? Ultimately, if you were given 100% free rein, would the finished work have looked like it does now?

If we had been given a million dollars to make this, we might have tried to make a live action version of it, but now I can’t really imagine it being any other way than it is. We also wanted it to be longer but the network were insistent on the length. All those things now seem irrelevant. When something is around for as long as this has been, it becomes hard to imagine it any other way, and the fact that I don’t see it and wish I’d done something different is a both a source of satisfaction and a relief.

Obviously altering title sequences can be very expensive but due to one circumstance or another there can often be a desire and need to make alterations.

You’re right. Often title sequences change or are updated. They haven’t touched a single frame of the sequence for Mad Men. In fact this season’s campaign is based on the title sequence. 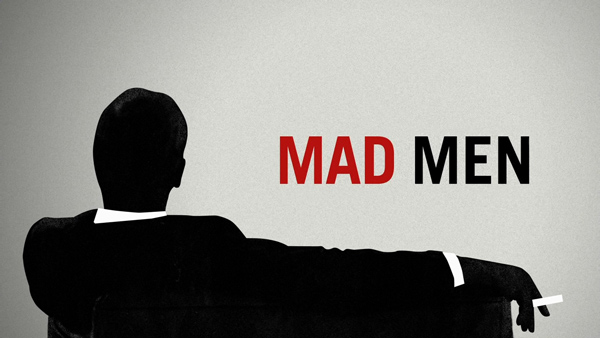 Let’s talk for a second about art and advertising. Do you see these as opposites? Can advertising be art in a way that isn’t ironic or as a result of the passing of time?

Obviously commercial concerns have always been a big part of art and – with the growing sophistication of audiences – advertising these days has to find smarter and ever more creative ways of calling attention to its products. The need for ideas, and powerful ways to communicate with the audience is applicable to both advertising and art.

On a purely personal level I don’t think of advertising as art. I don’t think of that as a criticism of either fields. Their purpose is simply different. You can say that advertising is quantifiable and art isn’t but that’s not as important for me as the roles the 2 things play in my life. I experience art as space, time and freedom away from what I do day to day (whether I experience art in a gallery, a book, online or out on the street). Sometimes it’s enough to just be in a place where art is being experienced for me to feel it’s benefit. I may not even be directly connecting with the art itself for it to be having an effect on me. I need there to be a separation between art and my commercial life probably because of the way my brain functions. Art is more indulgent both on the part of the artist and as a viewer and I like that.

Does the work you do for clients differ from your own personal creative work?

In my personal work I work almost exclusively in photography. And I shoot film. This helps me distance myself from my professional work where time is always of the essence and happy accidents (a feature of film) are rarely allowed. I nearly always commission photographers when I’m working. The distance as a director helps me see the bigger picture, but for myself, the craft combined with the art of photography is what I love more than anything. Also, the release of not needing to sell anything or make anything look glossy, allows me to take a picture of anything. I don’t need to justify it to anyone other than myself.

It’s clear photography is very important to you and this appreciation shows in your work as a title designer/director. Do you have any interest in moving further into film as either a DOP or Director? How to do you see yourself moving forward as an artist?

I’ve thought about that in the past. I am interested in photography and film, but I am even more drawn to the ideas side of the business. Experience helps me see more clearly what ideas will work in amongst everything else. At the end of the day, my work is held together by a belief that a great idea is the most precious, rare, dangerous and powerful asset that a communicator possesses. You can find any number of ways of realizing that idea but ultimately it is the idea that people will respond to.

A huge thanks to Mark for taking time out to talk to us about Mad Men, art vs advertising and his love of photography. You can check out Mark’s travel photography over at Some Bright Spark.