Each year at South by Southwest, the Flatstock poster expo showcases work from some of the best music poster artists the world has to offer. Dan Kuhlken and Nathan Goldman, aka DKNG Studios, have been resident poster artists for Hollywood’s Troubadour club since 2007. They’ve created posters for Phish, The National, Explosions in the Sky, The Black Keys, Iron & Wine and Flight of the Conchords among others. We caught up with Dan ahead of this year’s Flatstock, to quiz him on making a career in band poster design and his advice to fellow designers.

How did you meet your design partner in crime, Nathan?

We actually met in high school on our track team. He was in the pole vault team, I was in the sprint team. In my college years, I really missed doing any sort of collaboration in the creative field. I was still really into art and music and I knew that Nathan was into both too. He was more focused on the design side of things. I asked him what he thought about us working together. Nathan knew someone at The Troubadour in LA. He heard that they were looking for a poster artist. We took that as the opportunity to put our foot in the door. We sent three designs to them and the rest is history.

How did you go about forging a career creating band posters?

Design for me is actually kind of fairly recent, in the large scheme of things. I knew I wanted to be a professional artist but I didn’t know how to go about it. I told my painting teacher at the time. She was totally disappointed in me. She said, ‘don’t do graphic design, you’re a fine artist,’ and I explained to her that I wanted a job. At the time I was beginning to freelance with my partner now, making posters for The Troubadour. I was more interested in that than anything else. I took it as a sign that I should just focus on what I’m good at.

How long does it take you and Nathan to create a poster?

I’ve created posters in a day and I’ve worked on posters for weeks. On average, most of our poster work is around 40 hours. It’s conceptualising and brainstorming an idea, communication with the client and all the aftermath – even when the artwork is done. It’s creating separations and trapping for the printer, communication with the printer, picking up the prints, signing, numbering and shipping them. It ends up being a lengthy process. 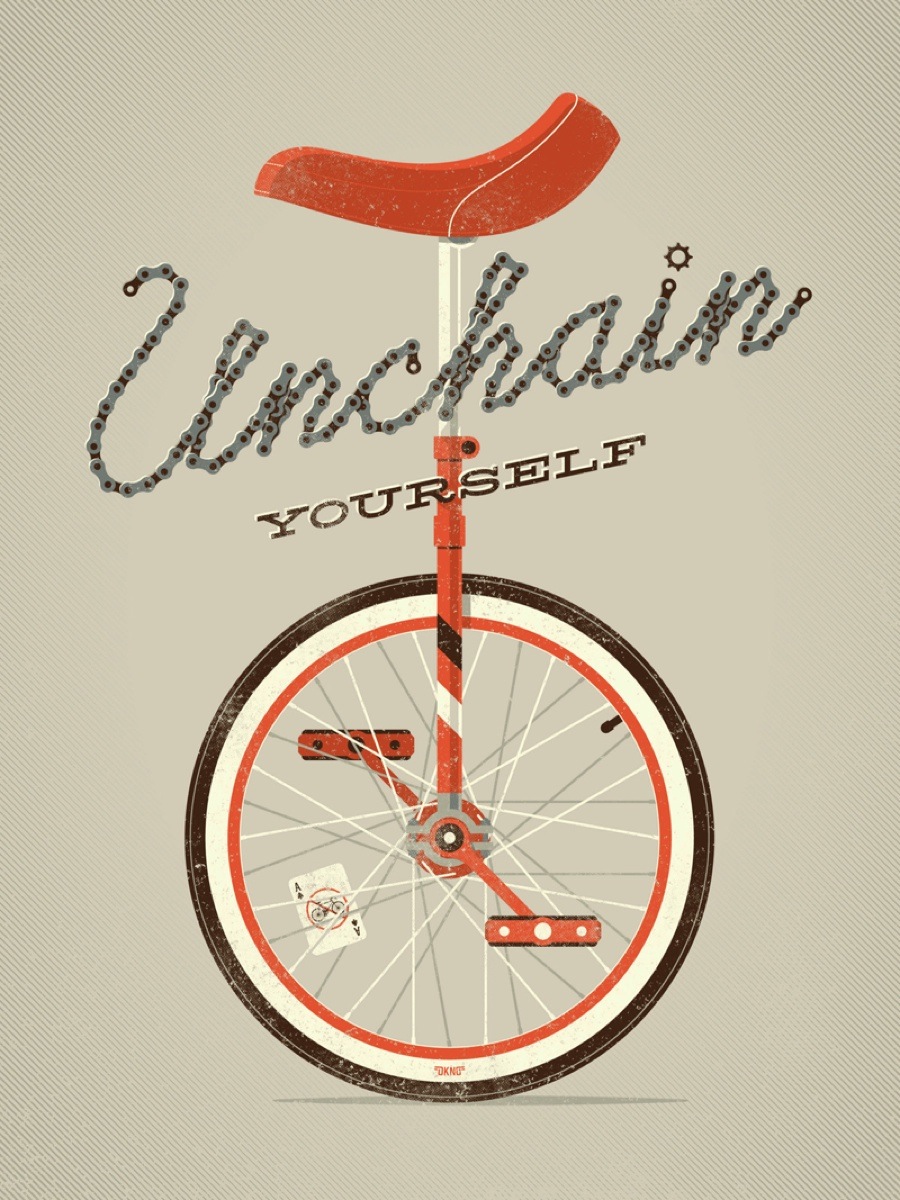 Can you tell us the story behind the Phish poster for New Years Eve at Madison Square Garden?

That poster took longer than I wanted it to! We had kind of a record with Phish. Almost every single poster we did for them, the next one was the best that we’d done. We were almost shooting ourselves in the foot because they kept hiring us and we were saying, ‘that’s great let’s do another one.’ So then they hired us for the New Years Eve run which is a very coveted series for anyone to do. I took it really seriously and was trying to make it the best poster I could possibly could make. What ended up happening was that the file was extremely heavy. We ran into some issues with crashing, there was so much information and too many layers. The fact that they loved it, it was well worth it. 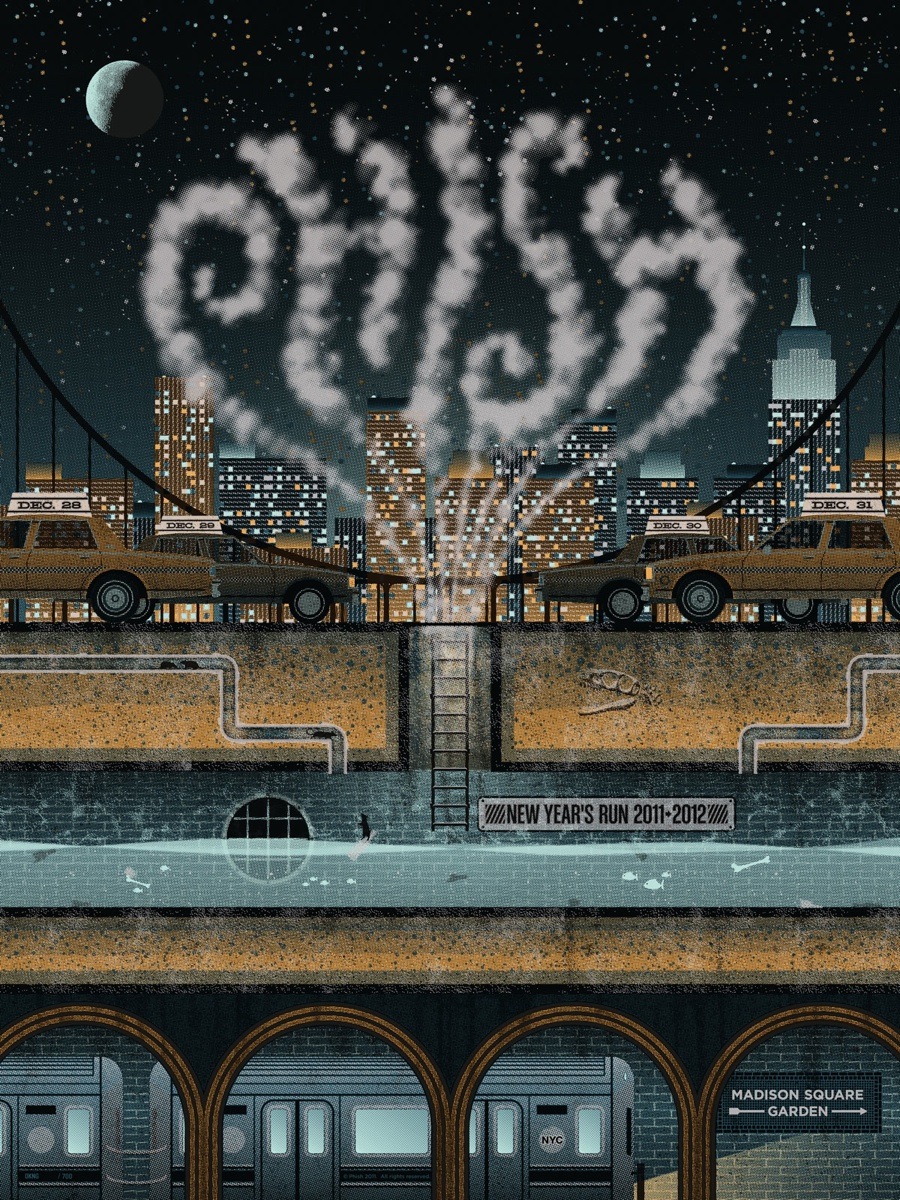 We always enjoy watching your process videos, like the one for the Explosions In The Sky poster. Was that your freehand drawing?

Yes, that was me. We had a couple process videos before this one and it was only computer based. I didn’t want to give people the idea that everything was all about the computer. It wasn’t even guaranteed that they would choose that concept. I started off with a very rough sketch that I did in less than 30 minutes. So I went straight to computer after that and recorded and was really inspired by Explosions In The Sky’s album and listened to their music the whole time I was making it. It ended up being exposed and went like wildfire. Explosions In The Sky shared it, it got onto Gizmodo, CNN posted it – those major sources spread like a net and now people know us based off that video. It’s actually pretty cool to be known through something like that, because they’re literally seeing the process and how we work. 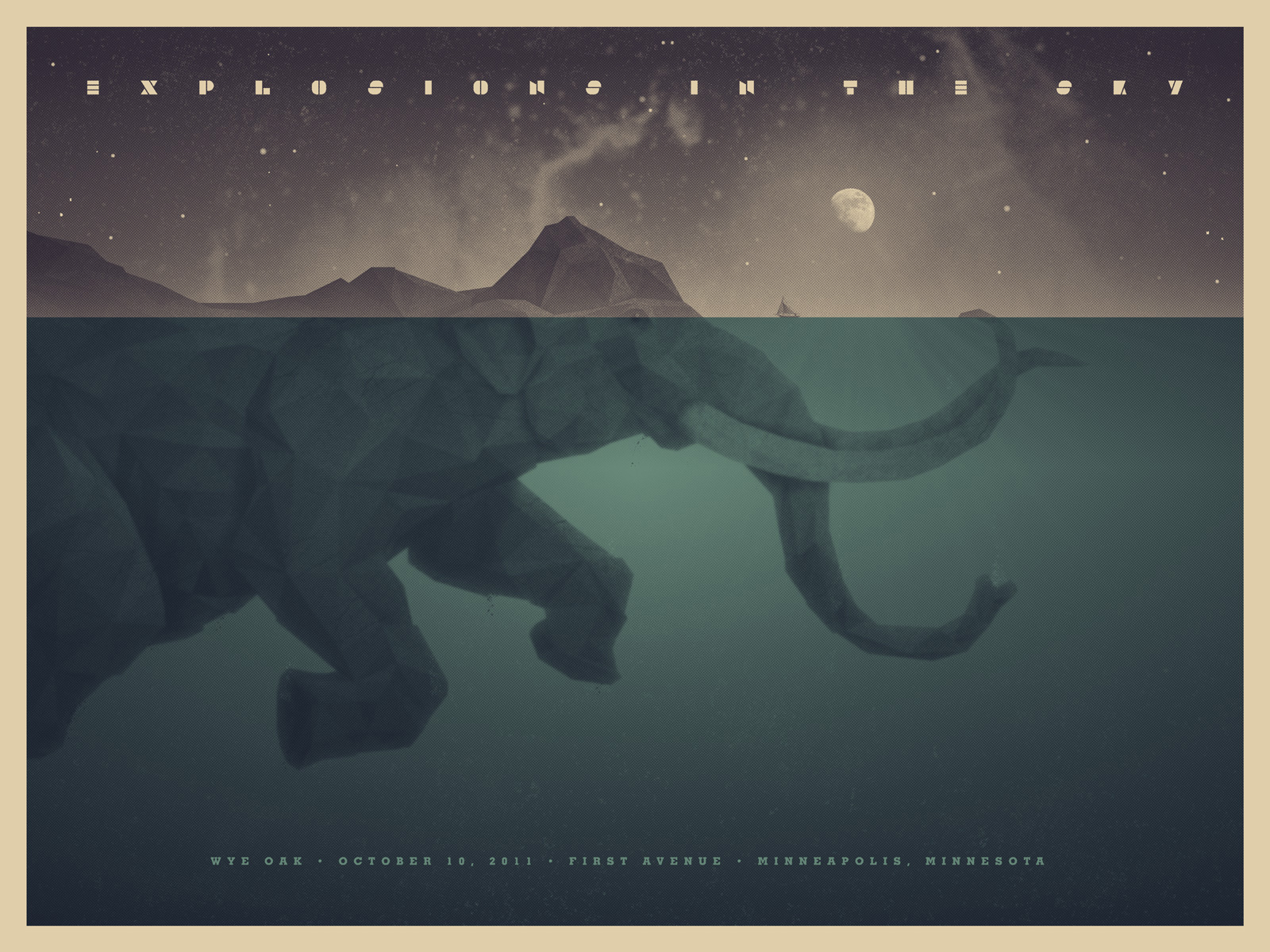 Image credit: Explosions In The Sky by DKNG Studios

Do you have any advice for maintaining a good relationship with clients? What do you wish someone had told you when you were starting out?

Be aware of not being satisfied with the way something is going with a client. I remember getting so frustrated about it and now looking back on it I kind of laugh a bit, because those negative interactions don’t change too much. It’s part of the game. Every single client has opinions on what looks good. It’s part of the job to really read minds and understand what they want. The people who are paying your bills are the ones who are going to be arguing against you. It’s a push and pull situation. Don’t be discouraged by it. You have to get used to it.

Could you list a career high and career low?

I think an important career low that’s turned into a high was probably in the very, very beginning when I decided to do this full time. I had a full time job and I was trying to do this at the same time. The time I spent at a full time job took away from what I really wanted to do, which was passionately work on art that I was interested in. That was my low. I felt like I was being held back. I had so much motivation to do so much stuff but I had no energy. The day I decided I was only going to do what I wanted was a relief, but it was also one of the scariest things I’ve ever done.

It took maybe a year or two to not feel like every month I was scared to pay the bills and the rent. It was a struggle, but I was really happy I was doing it. I was making my own hours and working just as hard as I could to get by and I knew that everything I put into it was coming out equally. Now after a year or two of working my ass off I’m finally able to work normal hours and have weekends like a normal person – and I don’t have to come into an office. I can travel as much as I like as long as I have my work done ahead of time. It’s a great feeling to have, but the biggest struggle was in the very beginning. It was a weird fusion of excitement and terror.

A huge thanks to Dan from DKNG for taking time out to talk to us about his posters, and the hurdles involved in starting out. If you’d like your very own DKNG masterpiece, we’ve got an original Black Keys poster to give away. To be in the running, simply share this interview on twitter (and don’t forget to tweet @redbubble) 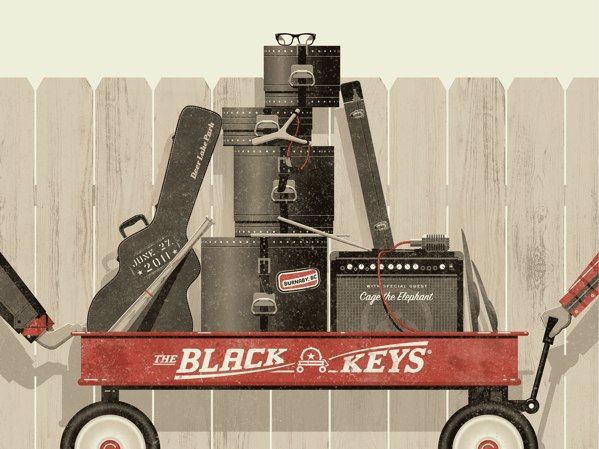