Getting lost in the visual cortexes of several dozen artists could well be the cheapest world tour on offer today.

You get the feeling that Gabriel Campanario’s love of urban sketching borders on obsession. That if, confronted with a streetscape featuring some nice contrasts and negative spaces, for want of a note pad, he’d pull out his last hundred Euro note without hesitation. A pen might be fashioned from a soggy chopstick found atop a municipal garbage bin (and it’d be dipped in his own blood if it was the only pigmented substance in reach). Such is the artist’s desire to capture the archways, roads and architraves of cities wherever he goes. And Campanario isn’t alone in his love of translating urban landscapes into little rectangles of eye candy. In his book, The Art of Urban Sketching: Drawing on Location Around the World, he showcases the work of over a hundred like-minded artists. We’re led on a city-to-city world tour, refreshingly following a geographical trail, rather than an alphabetical one. 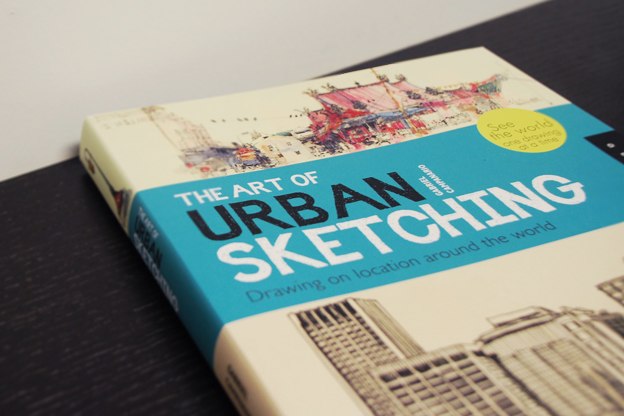 The book begins with a stirring summary of those hunched over street-lurkers who indulge in this hobby/passion/full-blown profession. The description is certainly well referenced: Gabriel Campanario is the founder of Urban Sketchers, a non-profit, online community of nearly five thousand artists. He’s also a staff artist for the Seattle Times and an award-winning blogger. Yes, one of those sickening, all-round legend types.

If you love a splash of spontaneity in your artwork, The Art of Urban Sketching delivers truckloads of it. A great deal of the book’s charm is in the seemingly arbitrary moments at which ink, pencils and watercolors are produced, a curb suddenly becomes a chair, two knees form an easel, and an accounts ledger, a canvas. (You certainly wouldn’t want to be going somewhere in a hurry with one of the book’s contributors!)

Those who have done a spot of sketching in public will be familiar with the reactions, both good and bad, that the practice can elicit. To describe these experiences, the book is dotted with interesting and sometimes moving anecdotes, such as this one from Adebanji Alade:

‘While on the train from London Bridge to Belvedere, I saw this guy and girl sleeping. I quickly started sketching. Then, the models became curious, and, in a not so friendly voice, the guy said, “What do you think you are doing?” That got me alarmed! I said, in a more friendly voice, “sketching”; I showed him some pages from my sketchbook, and he just sighed in disgust. He said, “Why are you doing this?” I simply said, “This is my life, I’m an artist, I do this every day.” Then, a few minutes later, as I continued, he said, “Let me see the one you are doing of us.” I showed him and watched his mood suddenly change. He shouted, “Wow!” He then apologized for speaking to me aggressively. I promised to send him a scanned copy. He was all smiles at the end! I left the train with a beam of the joy of sketching!’

In addition to delivering a magnificent assortment of images for your viewing pleasure, the book is something of a guide for artists. Each piece is accompanied by a log of the materials used and many include a tip from the artist. These range from pragmatic hints to somewhat more esoteric, nonetheless useful, guidance.

Such assistance makes The Art of Urban Sketching a unique addition to the average bookshelf, as it serves not only to showcase artwork, but also to encourage a whole lot more of it.
And the artwork itself? Positively inspirational. Or crushing, if you find yourself having the same reaction as Picasso’s father in the purported pigeon story. The few images you see here are but a tease. Throughout the collection, domes, bell towers and skyscrapers punctuate the skies over more than 50 of the world’s cities. Below, these blend with the organic – trees, crowds and the odd passer-by who becomes caught in a more detailed description by the sketching artist.

Many of the sketches tell stories of hours-long sittings during which every visible pillar, streetlight and window sill is patiently laid out, before equally careful application of watercolor brings yet more reality to the scene later on. Others sprawl energetically outwards from a central point speaking volumes of the artist’s passion and the natural caprice of the act. Frequently, too, the result maps out the energy of the location in a way that begins to invade other senses. The olfactory detects burning diesel, asphalt, coffee; Auditory, the bell of a streetcar, a crowd’s low hum. Getting lost in the visual cortexes of several dozen artists could well be the cheapest world tour on offer today.

And if you need just one more excuse to get your mitts on a copy of this unassuming, yet impressive collection of urban imagery, it’s over three hundred pages long. That’s value to satisfy a city block of accountants. 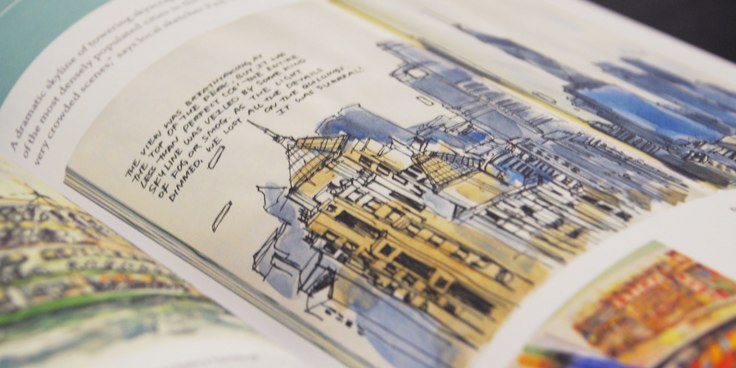